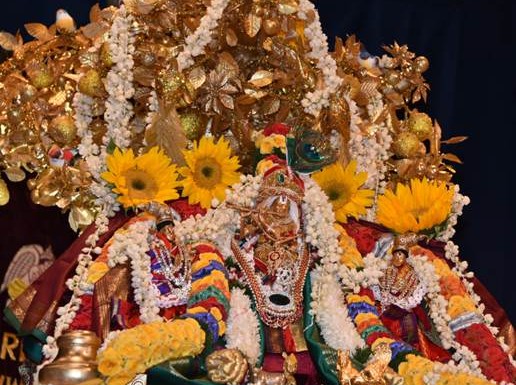 A report on the recently concluded Annual Krishan Utsav provided below for perusal and review. Request you to kindly publish in Anudinam.

With the blessings of His Holiness Srimushnam Andavan Shri Ranga Ramanuja Mahadesikan of Andavan Ashramam and Rukmini Satyabhama sametha Venugopala Perumal, the 6th Annual Krishna Utsav was conducted on Nov 23 2014 in Atlanta. This time the event was very unique in many aspects. Each aspect deserves a separate report. The special Kalpavruksha vahanam specially built by Atlanta based Bhagavathas in the last few months, the 108 different fruit baskets offering to HIM during the Utsav, the special congregation the event had with Bhagavathas travelling from far and wide from about 7 different states in the country to take part in the event and get HIS blessings, the unique blend of vedam, prabhandam, bhajan, namasankeerthanam, music, dance and so on that HE relished during the utsavam, the special purappadu on the Kalpavruksha vahanam; it appeared as if the vahanam and the Lord were competing on who should glow more- HE definitely won.

Along with the  Bhagavadhas, Varuna bhagwan was in attendance to invite the Lord and Acharya Padukas to the Hindu Temple of Atlanta. The event started at 9 AM with Aradhanam and Seva Kalam and was followed by Kalyana Utsavam. The prakara utsavam was a key highlight. The event was attended by over 300 devotees.(this event was also unique in the sense that social media was used extensively to communicate to a wider audience on the event). The bhagawathas prayed to HIM and also wished from the Kalpavruksham that all their prayers get answered. The event concluded with theertha prasadam and satari anugraham.

The video can be viewed in https://www.youtube.com/playlist?list=PL0lYoXlsVcsfUeZJRoXhaKFaFSh4k8doV